“Sam and the Apple Tree Man”
by Stella Huerto

In the wild apple grove in the woods, Sam sometimes saw the young man. It started when Sam was fourteen and just realizing he was gay, and had continued every autumn for the ten years since. The stranger’s sly face peeked down at him between sun-dappled branches, or his tattered brown jacket and bare feet flashed by as he darted behind trunks. The man had always looked to be in his twenties, never changing in all the years. He only ever showed when Sam came alone, never when Sam’s sister or father were along.

Sam started venturing to the grove alone in search of him year-round, not just in apple season, though only in autumn did the apple tree man ever appear.

He watched Sam with interest, his smiling lips red like some of the apples, eyes pale green like some of the others. Occasionally he drew quite close and touched Sam, a surprise kiss on the back of the neck while Sam picked the misshapen wild apples, a tantalizing stroke down his back, a squeeze of his ass. Sam always reached for him too, sometimes catching a handful of sun-warmed jacket and once even managing to turn and meet those lips partway in a kiss that landed off center but electrified him with desire. However, the man always vanished as fast as he had appeared, leaving a scent in the air of male sweat and apple-tree bark.

Sam enjoyed these strange encounters more than he should. Everyone in their hometown owned cars and cell phones like the rest of the world, but they also knew about the fae and the dangers of being caught alone by them in the woods at night. Some people who’d gone out like that had never been seen again.

But even after growing up and having relationships with human lovers, Sam’s imagination kept straying to the apple trees.

“You shouldn’t go out there alone,” his father and older sister Alice kept telling him. “You know you shouldn’t.”

The fae were stronger on certain nights, like tonight, Samhain. Halloween. You were asking for trouble going out alone then. Sam had never dared.

But this year, age twenty-four, with a messy breakup recently behind him, no close friends in town, his father and sister immersed in the financial planning business that employed Sam too but had never interested him, not getting to spend time outdoors as much as he liked…

Sam wanted excitement. He wanted the apple tree man and he wanted him to stay. Just tonight.

He texted Alice to say he was going to a Halloween party. Then he bent an open-ended iron bracelet around his ankle and, as sunset approached, walked to the grove of gnarled apple trees deep in the woods. He sat against a tree on the chilly roots and leaves, drew his jacket around himself, and watched night fall.

White wisps floated by first, their skeletal faces blowing ice-cold breaths upon him. Sam had never seen them so close up before, but they didn’t harm him; they only passed. He heard yips and screams, the forest’s creatures waking, some ordinary animals and some surely fae. Sam could only see shadows now, but whiskers or claws brushed his hands a few times. At the sniff of the iron, the creatures pulled away and left him alone. Sam waited. He could see nothing anymore but the darkening blue of the sky and the occasional glowing wisp.

Then the air filled with the scent of sweat and apple bark. Sam’s breath quickened. He heard a low, pleased chuckle—the first time he had ever heard the man’s voice. Footsteps rustled in the fallen leaves. Hands slid onto his chest, fingers probing beneath the open edges of his coat to tease his nipples. The point of a wet tongue licked his neck while curls tickled his ear.

Sam gasped, growing hard instantly. His searching hands clutched wiry biceps through a jacket that felt like it was made of leaves, which somehow didn’t rip and instead held together like fabric. The man settled his knees between Sam’s legs. He cupped Sam’s groin, stroking him through his jeans, and caught Sam’s moan in a kiss, his lips hot and sweet like a bite of apple tart. Sam drew the man’s tongue into his mouth to suck it. He shoved the leaf-like jacket off, finding the man’s chest bare under it, his skin silky and hairless.

“So brave.” The man’s voice sounded like a rasping wind through dry leaves and at the same time like an ordinary amused young man.

Then his bare foot touched the iron around Sam’s ankle, and he hissed and jerked his leg away. After a moment, he chuckled again and settled his hands on Sam’s ribs. “Ah. Don’t want me to drag you off?”

“I just want to be with you tonight.” Sam’s words tumbled out in excitement. “I’ve seen you, all these years. I’ve wanted you. I’ve…can you stay this time? Just for tonight.”

Panting, Sam slid his hands down to the hem of what felt like rough-spun trousers. “I want to see you.”

The man kept kissing Sam’s face and fondling him, but a faint glow rose from the ground: fallen apples had lit up, casting a dim rusty-orange light, just enough to see the man’s features. Sam had glimpsed him in daylight before, but only for a few seconds at a time. Now he drank his fill: long brows like charcoal marks, hair and skin cool brown like apple bark, full lips begging to be nibbled, those sly pale eyes. Despite being bare-chested and barefoot on an October night, the man didn’t seem cold.

On his chest were a few moles the exact size and shape of apple seeds. Sam leaned down to flick his tongue across one, then untied the drawstring of the man’s pants and let the fabric fall, exposing his stiff shaft, its shadow cast upon his flat belly by the ember-like light of the windfall apples.

His throat dry with lust, Sam wrapped his hand around it and began stroking the hot, smooth flesh. With a guttural groan, the man unfastened and pulled down Sam’s jeans. Straddling his lap, he took hold of Sam’s cock, his grip firm, his strokes quick and hungry. Moaning, breathing hard, they meshed their mouths together in urgent kisses, while glowing wisps streaked overhead and creatures screamed in the darkness.

Just as Sam was on the brink, whimpering and lifting his hips in need, the man dropped down and took Sam’s cock into his mouth, sucking him deep, fondling his balls with one hand. Sam couldn’t bear it more than a few seconds. With a cry he arched his spine and came hard, shuddering, the unyielding trunk of the tree bruising his back, his shoved-down jeans and iron anklet catching on the fingers of exposed roots.

He had barely caught his breath when the man rose up, offering his stiff cock to Sam’s mouth. “If you dare to taste,” he teased.

You shouldn’t eat or drink of the fae’s food, but surely this didn’t count, and anyway, he’d already kissed him so deeply, and he wore the iron…

Sam grasped the man’s rear, pulled him in, and began sucking avidly. The man wound his fingers into Sam’s hair and thrust in time with the strokes of Sam’s tongue. When he came with a harshly expelled hiss of breath, Sam tasted the bitter skin of the wild apples.

The man pulled away with a satisfied sigh. Instead of vanishing as Sam expected, he flopped down to sit beside Sam and began laughing in a low pitch.

The man took Sam’s hand and held it aloft. To Sam’s astonishment, his own skin began changing to the rough brown of apple tree bark, and his clothing to the leaf-material that the man wore.

The man casually pointed toward Sam’s ankle, as Sam lifted his now-bare foot to look. The iron bracelet had fallen off, wrenched open when he caught it on a root. “Oh,” he said.

He should have been horrified, really. But maybe acceptance was part of the change.

Oh well. He had wanted to spend more of his life outdoors anyway.

It took several days for his sister Alice to come to the grove in search of him. Sam appeared long enough for her to see him, hand in hand with the apple tree man, the two of them brown and sun-warmed.

Alice grimaced in dismay. “Oh, Sam. I warned you.”

Sam shrugged, smiling. Then the next moment, he and his companion swirled away into the wind with the falling apple leaves.

Stella Huerto is seduced by love stories of all kinds, and when not writing or reading, she enjoys travelling to places with charismatic old buildings, cooking with lots of spice, and singing passionately (if off-key) to songs from musicals. 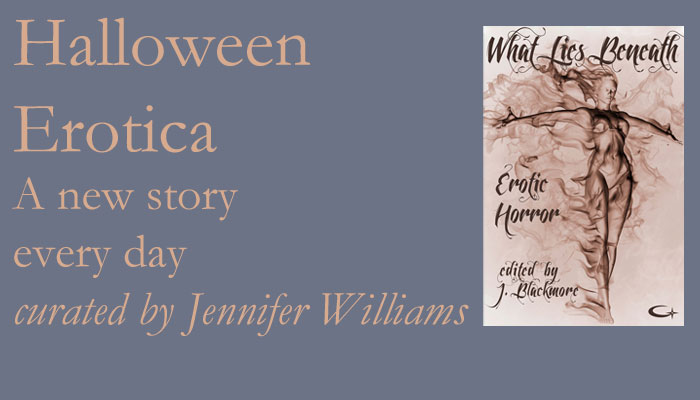