“An Offering to the Forest”
by TS Porter

Humanity came, with fire and axes, smoke-belching machines ever larger, and chemicals increasingly caustic, but the dryads survived. The great forests were felled, the fae retreated, and many gods died, but the dryads remained. They learned new words for fear—clearcut, feller-buncher, defoliant—but they never faltered.

This is not to say that they were unchanged by the onslaught. The few remaining dryads of the American chestnut were deeply entrenched, tall and fierce in the face of extinction. Some hid in lumber farms, all but invisible among the regimented stands. The dryads who bound themselves in desperation to the kudzu grew into ravenous titans. Others diminished into strange constricted forms, as heavy-pruned as the orchards they tended.

Most, though, bound themselves no longer to single trees, so easily felled, or even groves, vulnerable to clearcut. Most claimed sprawling territories and varied species that were unlikely to be destroyed all at once. They became hybrids, dryads of many trees. They were weakened without their old focus, instead spread thin for resilience. So long as a single tree lived—from a sprouting seed to a regrowing stump—the dryad of a forest would survive.

The dryad of a steep-hilled hollow about and above a small stream was such a hybrid. Their name was Petrichor on Pines, Deep Sandy Loam with Round Pebbles, and the Drumming of Red-Headed Woodpeckers.

In the harsh new seasons it was best to be diverse. Some species in it might die, but the forest remained. Danger was everywhere, but Petrichor’s chosen hollow was difficult for humans to traverse, so safer than most. They tended their forest carefully—keeping it lush and healthy, but not so rich in “resources” that it would attract human attention. They nurtured orchids and other vanishing ephemerals where they could, and encouraged brambles and nettles and poison ivy.

But nowhere was immune. Humans came with machetes, intricate instruments, and strips of bright plastic to mark boundaries. Surveyors, the harbingers of destruction. Petrichor’s entire hollow was compromised. They rooted their trees deep, concentrating resources underground for resilience. They spread themself further, with permission, into the ranges of other dryads, preparing to survive defeat.

For two years Petrichor prepared and waited. Humans came with heavy boots and hungry eyes, but they left and did not return. It was high summer when one human came back again, and then again. This one had humanity’s hungry eyes, but light feet when walking the forest, and radiant smiles for Petrichor’s proudest trees. This human did not measure the trees for cutting, content to gaze at them with a worshipful sigh.

When harvesting berries from the brambles, or herbs along the stream, or mushrooms from the fallen trees, she took only a few and whispered thanks. When she found one of Petrichor’s orchids, she did not pluck it or step on it. She knelt nearby, admiring for long minutes before carefully moving on.

Still, Petrichor did not relax their vigilance. The human searched persistently, sometimes standing still for long moments, listening hard and seeming displeased. She wanted something, and that was when humanity was at its most dangerous.

She returned through the summer. On the fall equinox, she came with a heavy pack and hiked into the center of Petrichor’s hollow. She gathered things as she walked—fallen leaves and acorns, and a bottle of water from the stream.

When she reached the largest trees at Petrichor’s heart, she stopped. She set her long hair loose, removed her shoes to stand on the earth, and took several long breaths with her eyes closed. She bowed to four directions—East, South, West, North, East again—and spoke. “I am Jay. I greet you respectfully. I mean you no harm.”

Jay took a blanket out of her pack, lay it on the ground, and knelt upon it. On its other end she placed an earthenware bowl, into which went a loaf of braided bread and a jar of jam made from Petrichor’s own bramble berries. She placed a matching cup beside it, and filled it to the brim with water from the stream. Around them both went the leaves and nuts she had gathered on her hike, a halo of tokens from most of the species Petrichor was now.

An offering. To Petrichor. It could not be anything else. Petrichor was pulled toward it, in fascination and no small part of fear.

Jay took out a tiny pot of balm, which she applied to her temples. It smelled of beeswax and rosemary, and the mint that grew along Petrichor’s stream. She touched it to her eyelids as well, and set the pot aside.

“I bring you this offering in peace and love,” Jay murmured. “I witness your growth, your beauty, and your strength. I wish only for your safety.”

Petrichor felt the magic of Jay’s ritual, the truth of intention in her words. On its purity, Petrichor accepted the offering. The essence of the bread was as sweet as spring sap. It was nourishment, and a fiercely protective love, and a longing for connection as bittersweet as the first frost. Petrichor reveled in it, taking the strength offered them. Who would have thought humans were capable of such anymore?

“I witness you,” Jay murmured, and lifted a small knothole of wood to one eye to look directly at Petrichor. Her breath caught, mouth falling open.

Petrichor was diminished from their former self, but Jay looked at them as though she had never seen something as beautiful as their tall, gangling shape bent to the curvature of the tree trunks and branches, leaning far over to accept the offering.

“You… you’re the spirit of this place,” Jay said. “You wanted to keep me out? But I’m here.” She seemed to gather her thoughts. “I greet you and beg your welcome. I vow to protect this land and forest.”

“Priestess.” It had been an age since Petrichor had heard of such, not in this part of the world, but there was no denying Jay’s intention. Petrichor cupped Jay’s tiny body in the long knobble-twigged branches of one hand. “You swear to protect this, the place of my strength, all the days of your life?”

“All my days and longer,” Jay promised, without hesitation. “I’ve put my parcel in a conservation trust that should last long after I’m gone. This place is worth protecting.”

Petrichor could not understand all the words, but the meaning was lasting safety. Petrichor had a human here, the most deadly of adversaries, on her knees vowing to fight on their side. Petrichor leaned down close, pressing a kiss to Jay’s forehead. “So be it.”

They released Jay, drawing back, but Jay swayed forward to follow with a small sound of loss. She reached up as if to pull Petrichor back. This was another offering, its spirit calling out to Petrichor. Their priestess ached to give them more.

“You would give your pleasures?” Petrichor asked.

“Yes!” Jay gasped, breathless. She moaned when Petrichor took her between two hands, body falling lax in surrender, trusted to Petrichor’s grip. Petrichor stroked her gently, the smoothest-barked of their branches against Jay’s fragile skin. They rucked up Jay’s loose shirt and the bra beneath, freeing her soft breasts. Jay’s spine arched, pushing up as Petrichor rubbed and kneaded them.

Jay dropped the knothole, but a priestess in the ecstasy of worship could see Petrichor without it. She gripped Petrichor’s branches, holding them close. Her hips made small thrusts into the air. Petrichor pulled her pants down to her knees and slipped one slender branch between Jay’s legs. The folds of her sex were hot and wet, a flower overflowing with nectar, and her whole body shuddered when Petrichor rubbed her there. Her pleasure thrummed through Petrichor and on to the forest, enriching it with potent fertility. It rose in waves, and Jay’s whole body bucked and twisted in Petrichor’s grip when it reached its peak.

There was a suspended moment, crystalline as sunshine after a spring rain, and then it passed; Jay collapsed in Petrichor’s hands. Petrichor gently lay their priestess on the blanket and withdrew.

As Jay gathered herself, straightened her clothes and closed her ritual, Petrichor did much the same. They held power they had not felt in an age, and spread it through their hollow. Trusting to Jay’s promise, Petrichor dared center deeper in the trees at the heart. They were still scattered far for resilience, but now they could afford some focus for power.

Jay gazed at and touched the trees far more reverently than usual on her way out of the forest.

“Return to me at the vernal equinox, my priestess,” Petrichor murmured. Jay could not hear or see them, but still she paused and looked around as though she might, a faint smile on her lips. She placed her hand over her heart and bowed when she reached the forest edge.

Jay left the forest with Petrichor’s mark shining on her brow and in her heart. Petrichor knew she would return.

TS Porter may or may not be a collection of knobbly twigs animated by ancient magics and cleverly disguised as a human by the use of glasses and an oversized hoodie. Their work has appeared in several out and upcoming Circlet anthologies. They can be found at ts-porter.tumblr.com or on twitter @tsporterauthor 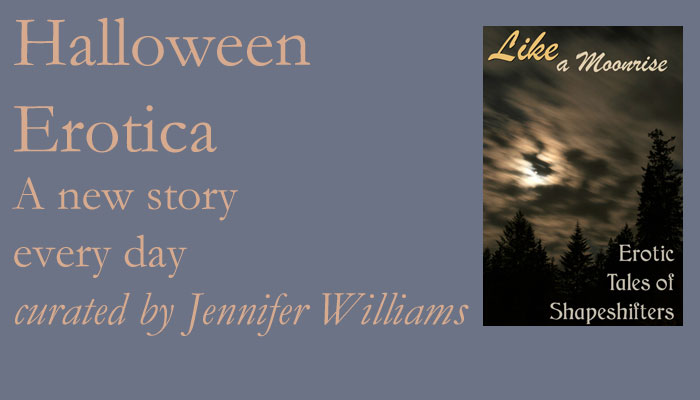