“The Succubus” Gift”
by Kait Muse

“This is definitely not the place.” I flashed my car’s high-beams on the dark cabin.

“Obviously,” Amy said, sitting next to me. I glanced over at her, making sure my eyes didn’t linger too long. Dressed with cardboard wings, horns, and only enough to cover her naughty bits, she looked hot.

I shifted in my seat, feeling my cock stiffen. It didn’t help that I wore a mini-skirt. Yes, my lesbian best friend and I were going to the Halloween party as a pair, she a succubus and me the school girl she had corrupted. “Must’ve took a wrong turn when the GPS lost signal.”

“Mhm. Wanna check it out?” Before I could reply, Amy was out the door. My lights illuminated her ass contained in black Bikini bottoms and fishnet stockings.

I sighed. If only I was a woman. I cut the engine and lights and got out of the car. I’d known Amy since elementary school, before we even knew why the world was divided into guys and girls. I followed Amy, guided by the flash on her smartphone. She was already up the porch steps and peering into the cabin when I caught up with her.

“I think I heard about this place,” she said. “Isn’t it supposed to be haunted?”

I shrugged. “If you believe in that sort of thing.”

Amy tested the front door.” It opened. We exchanged looks. I hesitated. Amy, of course, stepped inside. “It’s fun to think about.”

I tentatively went in behind her, looking behind me to make sure spooks didn’t follow us in. The phone’s flash illuminated an empty living room.

She walked around, as if inspecting it for purchase. She spun around, grinning. “So, whatcha think? I heard it’s either a secret hallucinogenic drug lab, a cabin where a serial killer lives, or it’s haunted by a demon who changes people into bizarre creations.”

I shrugged, took a step back, ready to bolt. “I’ll take number four: we leave a perfectly ordinary cabin because we’re trespassing.”

“Oh, come on, Chrissy.” She turned back to the living room. “Live a little.” She waved the light about, creating a strobe effect.

Amy was the only one who ever called me Chrissy, and to be honest, I kinda liked it.

I let go of the door handle and tentatively walked toward the room’s center. Suddenly the crickets sounded menacing. The cabin creaked, and not just from me walking over the old wooden floorboards. Outside, a howl. Did wolves live in this area? “Amy, I really think we should take off.”

“Scaredy cat?” She grinned. In the dimness it looked malicious.

The door slammed shut. We both jumped. I ran over to open it again. Locked. Of course. “Think I’m a scaredy cat now?” I sneered at her.

She shook her head, fright peeling away her previously happy face. “Sorry. Do you smell…”

I took a whiff. It was sweet, not unpleasant. But the thought of what it might be. “Oh, no. No. No. No.” I felt drowsy. Amy collapsed to the floor. My legs grew weak and my eyelids too heavy. The ground rushed at me.

I woke groggy, not sure where I was. The sheets were soft and warm, the bed cushy and comfortable. The bedside lamp was on, illuminating a winged human figure staring out the window. “Beautiful, isn’t it?” The voice sounded like Amy’s, but not quite.

“What?” I said, several octaves higher than normal.

In the dresser mirror the person staring back at me was a woman. I blinked several times, disbelieving. Then I got up and approached the mirror, as if it might be an illusion. My face was softer, more rounded, and my hair longer.  But my body now really held form to the school-girl outfit. Where I wore fake breasts to fill out the uniform, real boobs strained against the fabric. I jumped a little, and giggled at the bounce. Straight narrow hips were now replaced by curves, giving the too-short mini-skirt its intended erotic flair. “How’s this possible?” I made for a hot redhead. I wasn’t just speaking about my transformation, but the entire room and the demon standing at the window. I suspected the rest of the cabin was similarly furnished and transformed from an abandoned house.

“Consider it a gift.”

I startled. The succubus at the window now stood by my side. I turned to her. As with her voice, her appearance was not quite Amy’s. “What did you do to my friend?”

“I’m borrowing her.” She purred, which stirred a heat within me that wasn’t quite my cock hardening. I knew without looking I didn’t have one anymore. “You’ll get her back soon enough.” The succubus leaned in for a kiss.

I met her halfway. As our lips melted into each other I felt a hand at my crotch. Fingers parted the panties’ fabric and went inside. I cooed at the sensation. I backed into the dresser bureau and the succubus knelt down before me. A forked tongue wetted hungry lips. She pulled down the panties and I automatically stepped out of them. Then…

“Oh God!” Almost immediately my whole body shuddered. I’d had my cock sucked, but that couldn’t compare to this. The sensuousness, the heat. But the succubus wasn’t done. My body rocked several more times. Things went hazy, blurry, my cunt vibrated with a warm intensity. Somewhere, somehow, I found myself lying on the bed, still getting eaten out. An eternity later the succubus looked up from her dining.

With a lascivious grin, she said, “Your turn.”

“Don’t you dare stop sucking my pussy,” she commanded.

Somehow, I didn’t. My cunt exploded with wave after wave of pleasure. And she, her inhuman sounds and spasms told me I was getting her off too. The erotic bliss felt so good, too good. Of course it felt so good, she had lured me in with pleasure. She’s a sexual vampire. With this sudden realization, I screamed, “Stop!” But nothing happened. My lips didn’t move. I screamed several more times. I don’t even know if the screams got out of my mind. I tried fighting her, tried pushing her away. My muscles were paralyzed, locked so that her clit was on on my lips. I heard laughing. Wicked laughing. Her laughing. She’d caught me. And now I was dead.

The sun woke me. My back hurt from sleeping on the floor. Amy–not a succubus look alike, but my friend–still lay asleep. What a horrible yet also pleasurable dream. “Amy,” I said, shaking her shoulder. My voice was still too high.

Couldn’t be. I looked down at the real tits contained within the fantasy schoolgirl top. I felt down below. No cock. And no panties. “Impossible!” I stood, looking around, as if for a hidden camera and hidden pranksters.

Amy looked at me, a grin forming on her face.

Amy stood. “Like the succubus said, consider it a gift.”

“So you remember it too?”

She nodded. “Mhm. It was very strange, being possessed. Like watching a movie, but also feeling everything. You give very good head.”

“Do I now?” The oddity of the situation began to melt.

“Yep.” She pecked me on the lips, then kissed more passionately, sucking my tongue. “I wouldn’t mind fucking again before we leave this strange place. What do you think, Chrissy?”

“I think that can be arranged.”

She growled her assent.

We collapsed back to the floor.

Kait lives in Denver, CO with her fabulous wife and two rambunctious cats. She’s had several stories published with Circlet Press under the name Shawn Erin. You can follow her on Twitter @Kaitwrites. 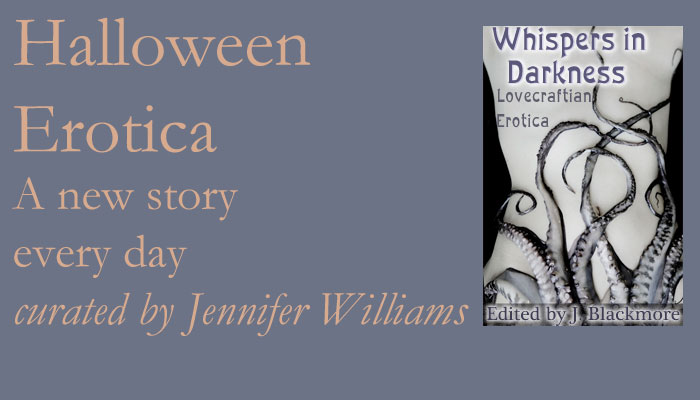