Electrical and torrential: that is the storm I find myself out in. Rain lashes the blacktop, and icy blue fire veins the night sky. Water and electricity, primal elements of the gods. I’ve been praying to them, or to something, some prehistorical entities. The eternal hurt has brought me out here tonight, along this particular stretch of roadway. Because I miss Jeremy. Ten years on, the bitter yearning persists.

He would stand out here and hitchhike, ten years back–hitchhiking to come see me, ignoring every warning that it was an unsafe means of travel. When he had a free weekend, he’d come down and we’d meet and embrace and kiss, and then go fuck.

We’d both been nineteen. I had such love and lust for him.

Now I’m out in the rain, in this dangerous downpour, and I feel the hot tears brimming on my lower eyelids. Because I do this every year now, on this dismal anniversary. Ten years ago it was also raining, maybe as bad as this. Hard enough that a car hydroplaned, with Jeremy too far down the shoulder, his thumb out, no doubt that guileless elfin grin on his face. So optimistic. Such a free spirit. Couldn’t afford a bus ticket to come downstate to see me at the university, so he did the hitchhike thing, like a beatnik, like nothing could keep him from me and the glorious sexual congress of our entangled bodies.

I go into a slow turn on the empty road. The lightning flares. It’s white frozen raindrops for an instant, then velvet black, then I see someone at the roadside and I’m pumping the brake, afraid that I’ll go sluing right into the person, who is a silvered shadow…who I didn’t see there two seconds ago.

But the car is safely stopped. Rain drums the hood. I blink, and the two tears finally run down my cheeks. I reach over and open the passenger door, even though I’ve never picked up a hitchhiker in my life and don’t even know for certain that this individual is one.

The person bends and ducks in out of the rain and drops his dripping self onto my passenger seat. And turns. And grins. He is young, much younger than me. His eyes are alight with adventure. His face is pure innocence.

“I’m heading south to the State U,” he says. “Can you help me out?” His dark hair is flattened against his skull, his clothes soaked. He should look like a drowned rat, but he doesn’t; looks instead…alluring, enticing.

All the civilized and sane mechanisms in my being want to protest. Vociferously. Vehemently. No, no, NO! This cannot be–

But I say, “Sure.” Because already in these first few seconds of this impossible event I am past sanity and decorum. And if I’ve been praying to primeval gods, those gods might have ears and might, just might, have listened.

He pulls shut the door with a chunk, and I drive us off into the sweeping rainstorm. My heartbeats are fast and loud. I palm the tears surreptitiously off my cheeks. My passenger is a crackling presence beside me. I don’t need to dredge memories to compare this face and body to Jeremy’s. I recognize the totality of him. I can even smell his scent despite the drenching he has received.

The lightning forks continue, webs of violent indigo. The rain is sideways, gusts buffeting the car.

I ask, “What are you traveling for?” Somehow my voice is steady.

He doesn’t hesitate, not for an instant: “Going to see my boyfriend.” Because he would blurt that to anyone, because he never acknowledged that such a thing would bother anybody.

The words tighten my chest. Going to see my boyfriend. At the state university. I feel some drastic reaction welling up in me, a little belatedly, I suppose, since I’ve already let this…phantom? spirit?…into my car. I might burst into heaving sobs in a moment. I might pound my fists on the steering wheel, because he can’t really be here and this is some cosmic tease. Maybe I should just floor the vehicle, drop my hands from the wheel, let the stormy night and the roadside trees have me, finally, to release me from my long-held pain.

But instead I say, “We should pull off for a few minutes at least. The rain’s dangerous.” Without waiting for him to speak, I slow and turn the car onto a dirt lane that nudges a little ways into the thick woods on the west side of the empty two-lane road.

I kill the engine.

Because we are two males parked in a clandestine spot, and why not take advantage? Libidinous Jeremy, insatiable Jeremy. Also, we’d both been nineteen years old, sexually unfettered, determined to rewrite all the rules of relationships and carnality. He could fuck whoever he liked; I could do the same, though I suspected I did less of it than him. So there was no foul in him offering to suck the cock of the person giving a lift down to the university to see the man he loved. It would make perfect sense in Jeremy’s world.

The tightness in my chest dissipates, all at once. A new response surges in me. I say, a little breathlessly now, “Actually…I’d like to suck you.”

Which gets him moving squirmingly in the seat, no reluctances, undoing his fly, working the sopping jeans off his hips. His cock is already hardening as it springs free.

I lunge for him, the last wisps of reason gone. I take him in my hand, squeezing his luscious swelling girth, then I’m shifting on my seat, lowering my head, dropping my mouth. The steering wheel digs at my rib cage, and I don’t care. I engulf his cock with my mouth. I suck him right down to his balls.

He groans. His bare ass makes the leather seat squeal. He thrusts up into my mouth. My heads rises and descends, familiar neck muscles straining. I have the taste of him, and I recognize this as well. His cockhead enters my throat. I grip him with a loving suction, riding the tight ring of my lips up and down his vein-lined shaft.

But I don’t pull away. I want his spunk; and seconds later it erupts into my mouth, warm, viscous, stingingly sharp. I swallow avidly. I am filled with delirium, with joy.

He’s panting as I sit up. His grin is maniacal now as suddenly he wriggles his jeans all the way off, his jacket and shirt following. He pushes open his door and steps out, reaching back in to take something from a pocket of his crumpled jeans. He tosses me a small square packet.

Naked, he bounds into the night and the trees and the flashing illumination.

He’s given me a condom. With a cry I shed my clothes, just as quickly as he, and follow him out. Raindrops that make it through the trees needle my bare flesh. I step gingerly, but he’s at the nearest tree, gripping it, bent forward, his scrumptious ass thrust toward me.

His beauty is inconceivable. My desire is fever-hot. I scroll on the condom and step in behind him. My cock throbs, ferociously hard. I jam my swollen cockhead against his asshole, and he pushes back against me. I enter him, feeling that grasp, that deep inner heat.

Setting my hands over the taut swells of his ass, I fuck my lover of ten years ago. I fuck him deep and hard. With each stroke the terrible loss recedes and the rapture of the moment encroaches.

My balls smack his backside. His head is turned, and he holds me with one eye.

I slam my cock into him; and the bliss ignites, and I start jetting into the condom. And in that same instant lightning touches the top of the tree he clings to.

Blinding. As I come, the world is white and electric.

And he is gone, abruptly, completely. Gone on his way to see his lover at the university, somehow. When I turn, even his clothes have vanished.

But I stand naked in the rain and know that our love has moved the gods themselves. 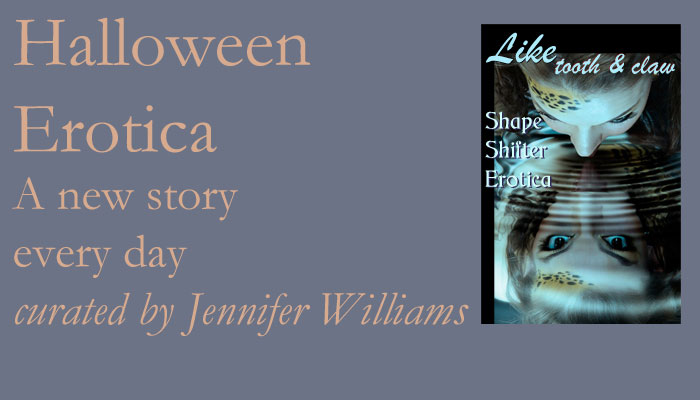