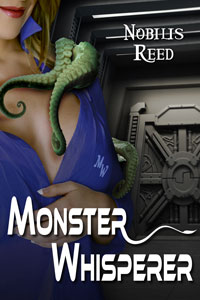 Or get it from your favorite ebook supplier:
Amazon | Barnes & Noble | Smashwords | AllRomance ebooks

If there’s something strange with your tentacle monster, who are you going to call? Dale Clearwater: Monster Whisperer. With her own ship and a menagerie of tentacle monsters, she travels from world to world, rehabilitating monsters and training the people who love them. From the amorphous, fluid Kritzoan to the stone-like Nalcheka, Dale embraces the monsters and records her encounters for a reality show that broadcasts to countless worlds. One might think there’s nothing she couldn’t, or wouldn’t, do. Still, when she gets a call from her old colleague (and old flame), Dale nearly turns him down. Nearly. Joining him to capture a particularly dangerous monster is part of an adventure that has the potential to change their universe – or lose Dale her monsters, her ship, her show, and everything that she holds dear.
And now, an excerpt from MONSTER WHISPERER:

14 thoughts on “Now in ebook! Monster Whisperer by Nobilis Reed”