Aurelia T. Evans’s “Jaded” features a determined FBI agent pursuing a shapeshifting conwoman—although her interest may not be purely professional. Jonathan Hepburn’s “The Case of the Kissing Men” and Shawn Erin’s “EROS and the Murdering Succubus” are two very different takes on the traditional premise of the PI being hired to spy on an errant spouse. “The Strange Case of Rebecca Rice” by Michael M. Jones sees a ghost teaming up with (and falling for) the detective who’s looking for her killer, while “Curse Marks” by Neil James Hudson features an investigator with the ability to read the minds of her sex partners dealing with a client who wants her to prove his guilt in a murder case. These delicious blends of mystery, fantasy, and sex should have something for detective fans (and erotica fans!) of all kinds.

Look under the cut for a hot excerpt…

from Jaded by Aurelia T. Evans

When Sharon was younger, she had been a clandestine geek; she still had the comic collection of her youth in her attic, and there was a Black Cat costume in the back of her closet that she brought out for Halloween parties when she planned to get drunk enough not to feel self-conscious.
She sometimes heard rumors of abilities flitting about like urban legends, but the little girl in her that used to pretend to climb walls continued to seek the fantastic, wishing it were true.

Jade Lucero excited her. She didn’t want to put her in a cage and study and poke and prod her. Simple and ridiculous as it was, Sharon—both the FBI professional and the little fangirl inside—just wanted to know her.

When Sharon was a teenager, reading supernatural novels with romance that titillated her budding desire for something strange and new and beyond the drab world in which she lived, she developed a theory: people with abilities—when they weren’t in the arcane trades—naturally gravitated toward either side of the Law. Psychokinetics made good thieves, but they also thrived in the military, where their great deeds were ascribed to luck, training, and loyalty. Psychics were good gamblers and crooked lawyers, but they also turned out strong, honest lawyers and cops with uncanny “hunches” and “gut feelings.” Mediums became graverobbers or detectives. And metamorphs… well. Metamorphs made good spies, but they were also excellent con artists.

Jade spread the pictures out like she was presenting her Tarot cards. “Obviously Photoshopped. It’s impossible.”

“Yes, quite impossible,” Sharon agreed. “But these pictures are simply stills. From a video.”

There was anger in those cold, dark eyes, but Sharon also thought she detected an undernote of fear.

Jade stared at her hard. Sharon recognized the trapped animal look in her gaze and wished she still had her gun. Of the two of them, Jade had the physical advantage, but Sharon was not going to be so stupid as to give her easy access to a firearm as well.
Finally, Jade murmured, “I’m not saying another word or doing anything until—”

“You have the right to an attorney, of course.”

“—until I know no one else is watching,” Jade finished, still speaking as softly as she could without whispering. “No recordings. No one in the other room.”

Sharon cocked her head and gave a secret smile. “There’s no one recording us now, Ms. Lucero. And there’s no one in the other room. It’s just us.”
“I hope you don’t take it personally, Agent Nast, but I don’t trust you.”

Sharon slowly slid forward on the table. Her hand brushed Jade’s cheek. “You think I’d let anyone else see me do this?”

Sharon made sure her body language was crystal clear as she angled her head and pressed her lips against Jade’s. Still gentle, still gauging the safety of the unconventional measure. Jade did not move for a moment, but Sharon didn’t expect her to jerk away and rub the back of her hand over her mouth in disgust. No, the last eight years had been such a long dance.

“I know FBI interrogation can sometimes go off the rails,” Jade whispered. The rush of breath was warm on Sharon’s lips. “But I still don’t trust you.”

Sharon stood, removed her tawny jacket and covered the camera, which was already off. Then she briefly left to roll a white board into the interrogation room. She moved it directly in front of the mirror. When Sharon returned to her seat, a placid smile still on her face, Jade considered her suspiciously, but perhaps with a certain understanding.

“Bullshit,” Jade retorted. “You don’t do anything but games. I feel like I’m meeting a boss for my next job.”

Sharon knew her smile could be infuriating, so she let it linger, her eyes glassy and so light blue they were almost gray. Doll’s eyes framed by invisible eyelashes. There were lines at the corners of her eyes, the only things to reveal that she was living.

“If you’re going to proposition me, I think you can call me by my name.”

“If that’s even your name.”

“It’s mine,” Jade said. She leaned back again, her shoulders relaxing.

“And the way you look now,” Sharon asked, “is that yours?”

Jade lifted her chin, fingered her engagement ring from her third marriage terminated by natural death—it was on the forefinger of her left hand. She wore her engagement and wedding rings like everyday jewelry when she wasn’t attached.

“This is me,” Jade replied quietly.

“Because it’s what I always come back to,” Jade said. “And it ages, although I can smooth that out when I want.”

Sharon crossed her legs primly again. “What’s it like to come back to this figure? How do you truly know what you look like?”

“It’s like relaxing. Slipping into a comfortable pair of jeans. It’s mine.”

“But….” Sharon flipped through the file to find the medical information. “That’s not entirely true, is it? You like the finer things in life, but you’re not afraid of dragging yourself through the dirt to get them. During your three-month stint in Indiana Women’s Prison, you suffered a homemade knife to the hip. While on your fourth marriage, you fell down a flight of marble stairs—stitches on the side of your head. In December of 2004, a police officer clipped your leg with a bullet. These are only a few wounds recorded. Yet I see no scar on your forehead, and I’ll bet if I asked to see your hip or your calf, there wouldn’t be scars there, either. Am I correct?”

File closed. Jade’s eyes were strangely vulnerable. Sharon slowly walked around the table to perch on the edge of the table, looking down at Jade and forcing Jade to look up at her.

Jade stood, noted the way that Sharon’s body tightened at the swift movement. Jade was mere inches from her nose. “You may have been chasing me for eight years, but you’re still taking this remarkably well.”

“Really.” This time, it was Jade who leaned in and kissed her, her full lips soft and lush. Sharon fought a grin as the tip of her tongue touched Jade’s lip lightly in invitation. 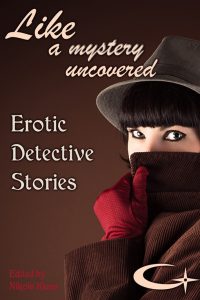