Our giant twenty-fifth anniversary collection is now available for download! Twenty of our best stories of the last five years.

Funded through a Kickstarter campaign run in 2017– the year of Circlet’s 25th anniversary– Superlative Speculative Erotica features stories voted on by the Kickstarter and Patreon supporters and reflects many of the genres published by Circlet Press: a little cyberpunk, a little high fantasy, a touch of horror, some superheroes, a bit of space opera, some paranormal… What unites these stories is their quality. Check this amazing list out:

Bête Noire” by Annabeth Leong from A Beastly Affair
“An Analog Christmas” by Kal Cobalt from Jingle Balls
“From The Shallows, Cold As Death” by Bernie Mojzes from What Lies Beneath
“Double: A Tale of Love and Engineering” by Nobilis Reed from Like A Love Triangle
“The Secret Life of Ramona Lee” by Michael M. Jones from Puxhill by Night
“Deflowered” by Avery Vanderlyle from A Beastly Affair
“Crow Luck” by Dame Bodacious from Like Fortune’s Fool
“Enchanted” by Shanna Germain from Charming
“Stolen Days” by TS Porter from Hard As Stone edited by Julie Cox.
“Bridge Over Shifter’s Chasm” by Raven Kaldera from Extraordinary Deviations
“Questing” by Charles Payseur from Nights of the Round Table
“The Night Air” by Mary Anne Mohanraj from The Stars Change
“The Closing Shift” by JJ Poulos from Coffee: Hot
“Wizard’s Staff” by Julie Cox from Hard As Stone
“Disarmed” by Vinnie Tesla from Silent Shadows Come
“In The Blood” by Kathleen Tudor from Like Fortune’s Fool
“Evidence of Things Unseen” by A.C. Wise from What Lies Beneath
“Season of Fire” by Sasha Payne from Wired Hard 5
“Primè Nocta” by Kierstin Cherry from Like Myth Made Flesh
“I Am The Very Model Of A Modern Circlet Editor” by H.B. Kurtzwilde & Alex Picchetti from Like A Circlet Editor

For a while, Beauty and I made each other invincible. She relished every beastly part of me, and so I found myself trusting her with anything and everything—even secrets I hid while I was still a lady.

END_OF_DOCUMENT_TOKEN_TO_BE_REPLACED

“The Traveler’s Tale”
by Vinnie Tesla

What’s the weirdest thing I ever saw in three-space? That’s tricky–there is some freaky shit down there. There was a time a few years ago… You know Elizabeth, right?

Yeah, she’s awesome. So I was just on a walkabout, checking out the sights, you know, and I find this one plane where they’ve got this giant, whitish moon in the sky. Just one, but big, and super-bright. And there were these big, stiff plants everywhere, with branches all over them, so when the wind blew it made this sort of spooky whistling noise.

END_OF_DOCUMENT_TOKEN_TO_BE_REPLACED

And Then No More of Thee and Me
by Vinnie Tesla

The door to his bedroom was ajar, but, maddeningly, not quite wide enough for her to pass through. Pushing herself through solid objects was still hard work, though she was getting better at it. The feeling of the heavy wood composite sliding inside her was intensely, indefinably uncomfortable, as if her entire body was one complaining funny bone. At one point she was seized with panic that she would be stuck there, unable to muster the strength to pull herself off in either direction.

Eventually, though, she made it inside the room. It looked just as she remembered. The pile of dirty clothes in one corner and the massive wooden dresser were vague, familiar shapes in the dark. A streetlight by the open window illuminated his nude, sleeping body. His torso looked pale; his cock lolled, a little swollen, against one bent thigh. END_OF_DOCUMENT_TOKEN_TO_BE_REPLACED

There’s barely more than a week left before the Steampunk Bundle disappears! In the lead-up to that heartbreaking moment, we’ll be running some hot excerpts from each of the volumes in the bundle. Our third excerpt is from The Erotofluidic Age by Vinnie Tesla, from the second story, “Miss Pierce’s Position.” This passage does contain implicit spoilers for the first story in the series, so if you have the book already but haven’t read it yet, you may wish to hold off on reading this.

The Circlet Press Steampunk Erotica Bundle
Five full books! Circlet Press's steamiest steampunk works all in one bundle. A discreet brothel staffed by robots. A theatre that enacts your most secret fantasies. A mad scientist whose machines are powered by human arousal. And more. Each of the stylish, sexy, and surprising books here takes Victorian science fiction to delicious new places!
Price: $26.96Price: $32.95
(also available at Amazon, iBooks/iTunes, Smashwords, Kobo and Barnes & Noble)

“Ah, Daedalus,” the new Mrs. Dalrymple sighed, “if it is any comfort, you do make rather a handsome Geoduck.”
As she spoke, she gently stroked along the length of my siphon, her soft fingers producing powerful sensations along my bare, wrinkled skin. I found myself shivering slightly under her touch.
“The time in London was lovely, but it was awfully lonely just Victor and me,” she said softly. “I have been looking forward to having my dear friends about me again.” She leaned down and kissed me softly on the top of my siphon.
Her breath seemed at that moment unutterably sweet, full of thrilling promise. I felt the heat rising from her skin, causing my own to prickle and warm in sympathy. My Geoduck senses, attuned to detect the immaterial substance of human arousal itself, caused her to fairly glow with a thrilling radiance. I could see her skin flush and her eyes sparkle as my prehensile siphon swelled beneath her hand, thickening and lengthening slightly as its wrinkles smoothed and its limberness gave way to near rigidity.
At that moment, Dewey appeared at the end of the corridor. “Uncle,” he said, “is Miss Pierce still–”
His voice broke the spell of Eleanor’s intoxicating proximity, and I sprang into the air, flying gracelessly towards the shelter of my nephew and the relief from temptation that he appeared to offer. He held out his arms for me to land on, then attempted to stroke me soothingly once I had perched. Another overwhelming wave of unwelcome pleasure overtook me. DON’T, I squawked, and he withdrew his hand apologetically.
A moment later, I was fairly crushed between two bosoms as Eleanor embraced Dewey, peppering his face with affectionate kisses. “Oh, Dewey, dear boy! How I have missed you!” she exclaimed.
It would perhaps be best to explain at this juncture that Eleanor is endowed by Nature with a temperament warm and generous almost to a fault, a quality which has served only to endear her the further to her husband, who, secure in her affections, permits her the greatest freedom in what other enjoyments she pursues.
In this case, however, the pursuit offered little enough sport, with the game fairly caught ere the first horn had been blown. Seducing my nephew is no great challenge for near any biped with a mind to do so, and Dewey’s acquaintance with Mrs. Dalrymple had been of the very warmest sort since before his elevation to the human race.
“Eleanor,” he gasped, “your kisses make me quite giddy.”
“Come, Dewey,” she answered, taking him firmly by the hand, “let us waste no time in renewing our friendship.”
Wherewith, she pulled him, stumbling, in the direction of her and Victor’s bedroom. I struggled to free myself from his grasp, but he had apparently been rendered insensible to my very existence.
In a moment she had dragged him into the room and was prodding him towards the bed. Release me this very instant! I quacked, and he absentmindedly complied, tumbling me painfully to the floor just as the door swung shut behind Eleanor’s impatiently flung heel.
END_OF_DOCUMENT_TOKEN_TO_BE_REPLACED

Boston’s big winter event for those into science fiction and fantasy is the Arisia Science Fiction Convention! Happening annually on the MLK weekend, Arisia draws together lovers of sf/f books, movies, costumes, games, and fandom itself. Circlet Press has been throwing an annual party at the con since 1993.

This year we decided to try something a little different! Join us at the Westin, room 461, for a Meet the Authors Tea party! When? Tea time of course! 4pm to 6pm on Saturday January 16th.

There will be both Chinese and English-style tea, snacks, and of course books to peruse and authors to chat with (or receive autographs from)! First 20 guests will also receive a free ebook and whatever other fun swag we may have…!

Among the authors and editors who will be on hand:

with more to be announced!

The Circlet Press Steampunk Erotica Bundle
Five full books! Circlet Press's steamiest steampunk works all in one bundle. A discreet brothel staffed by robots. A theatre that enacts your most secret fantasies. A mad scientist whose machines are powered by human arousal. And more. Each of the stylish, sexy, and surprising books here takes Victorian science fiction to delicious new places!
Price: $26.96Price: $32.95
FEATURING:
The House of Sable Locks by Elizabeth Schechter
The Innocent’s Progress by Peter Tupper
The Erotofluidic Age by Vinnie Tesla
AND:
1901: A Steam Odyssey by Lionel Bramble
AS WELL AS:
Like a Wisp of Steam Edited by J. Blackmore, with stories by Thomas Roche, Vanessa Vaughn, Jason Rubis and Kaysee Renee Robicaud

House of Sable Locks
“A powerful, sexy exploration of slavery, submission, and humanity from an author who wields both plot and prose with accuracy and total confidence.”—BDSM Book Reviews

“Elizabeth Schechter fuses diverse genres with such artful subtlety that we barely notice the genius at work before our eyes. Steampunk, erotica, fairytale romance, horror, sci-fi; Schechter does it all so deftly, blends it all so seamlessly, we are left wondering by what weird and wonderful magic such stories are created. “—Big Brain Erotica

The Innocent’s Progress
“Unabashedly badass, and viscerally satisfying. I wish I had written it.”—Amanda Gannon, Adventurotica

“I simply adored this book. It was written with seamless transitions, was fast paced, yet still had the feel of a truly Victorian work of fiction blended with all those lovely little anachronistic details we Steampunks look to see in our literature. I plan to add more of Mr. Tuppers work to my collection in the near future, and I suggest you do the same!”—Talloolah Love, Steampunk Chronicle

“When the characters engage in sex, love-making, or fucking, it’s steamy reading, all puns intended…Tupper’s a damn smart writer, and anyone who dismisses The Innocent’s Progress as just erotica might say The Dark Knight is just a comic book movie.”—Steampunk Scholar

1901: A Steam Odyssey
“The story is infused with such glee and charm…Not only is the premise fresh, but it is superbly executed. There isn’t a false step anywhere. Inventive, imaginative, saucy, naughty; 1901: A Steam Odyssey is all that and more.”—Kathleeen Bradean, Erotica Revealed

“[An] enormously entertaining debut novel.”—Cynthia Ward, Ambling Along the Aqueduct 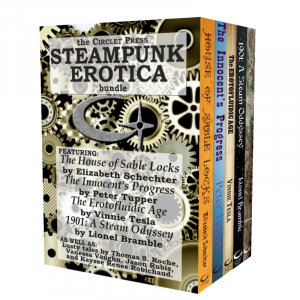 We’re trying something new this month with our very first ebook boxed set. And we’re going in big with four of our favorite Steampunk novels all for $5.99–the normal price for one of these books–with the short-story collection that started our Steampunk obsession thrown in as a bonus.

We’re including the award-winning House of Sable Locks by Elizabeth Schechter, the critically acclaimed Innocent’s Progress by Peter Tupper, the bizarre and witty Erotofludic Age by Vinnie Tesla, and the exuberantly swashbuckling 1901: A Steam Odyssey by Lionel Bramble; along with Like a Wisp of Steam, edited by J. Blackmore.

But this bundle won’t be around forever–it goes on sale on November 15th, and will only be available until February 15th.

Preorders are open now at Amazon and Smashwords. And to get the word out, we’re giving away five copies free for nothing! Sign up to win below:
a Rafflecopter giveaway