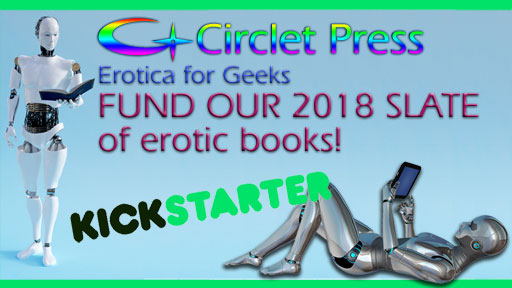 Verne’s books feature daring, intelligent men facing danger and overcoming obstacles in the name of scientific discovery. Journey to the Center of Desire tells the stories of people who love the adventurers: the ones left behind, or carried helplessly along, or are otherwise affected by these harebrained schemes.

In “Lunacy” by Jean Roberta, based on From the Earth to the Moon, two brave and daring women struggling in a man’s world come up with a brilliant–and ridiculous–idea to win their freedom and future life together. Luckily for them, great men can still be made into fools by beautiful women with a plan. In Annabeth Leong’s “Journey to the Disappearing Sea,” Axel, from Journey to the Center of the Earth, is forced to realize that his precious porcelain doll of a fiancée has her own hopes and dreams and strengths and they will not be hidden any more. In Corey Reid’s “The Unresolved Wager,” (based on Around the World in Eighty Days) Phileas Fogg’s friends Aouda and Passepartout make a bet to see who can teach the man they both love that living well requires paying attention to your friends… and having lots of orgasms. In “Poulp Friction” by Evadare Volney, we learn how deep the friendship between M. Aronnax and his loyal Conseil (of Twenty Thousand Leagues Under the Sea) actually is, and that Captain Nemo’s rebellious nature and technological acumen extended to much more personal matters than we were led to believe.

To celebrate Circlet Press’s 25th anniversary, we’ve invited some of our authors to look back at the early days. Lawrence Schimel remembers the year 1997, when we published his short story collection THE DRAG QUEEN OF ELFLAND, and launched our [non-erotic] gay and lesbian science fiction/fantasy line The Ultra Violet Library with it. He writes:

At the time, there was a healthy independent queer press scene with local LGBT community-focused newspapers and magazines across the US and abroad–which provided attention for new books about our lives that were often passed over for review in mainstream media outlets.
END_OF_DOCUMENT_TOKEN_TO_BE_REPLACED

A new chapter appears every Thursday. This week is Chapter Forty-Four.

“I’m only doing my job, you understand,” Adoric slowly drew in the tobacco smoke into his mouth and throat, and then it filtered out his nose, curling in on itself as he breathed out.

Dhiar held up a hand when offered one of the man’s cigarettes, from a silver case engraved with sirens all over it. “Oh no, I couldn’t. You’re going to need all of them you can get. So,” he rolled onto his side. “Your job involves rolls in the hay, as it were, with passengers?”

The first mate rolled to face Dhiar, stroking his cheek with rough fingertips. A man’s fingertips who had done so much work with his hands. “Only special ones.”

A new chapter appears every Wednesday. This week is Chapter Fifty-Six: Jorin

Sergetten spoke to the royal messenger alone and returned to me in a foul temper.

“Eyes down. No, close them. Don’t you dare look at me. Peek and I shall know, and your punishment shall be severe. On the floor. Hands and knees. Do not move. Don’t even tremble.”

I did as he asked, but I could not stop the sudden hammering of my heart. I tried to draw deep breaths, reassuring myself I had done nothing to draw this ire. I was burning with curiosity over what the messenger must have said, but either he would tell me when he wanted to, or he would not. This was certainly not the time to ask. END_OF_DOCUMENT_TOKEN_TO_BE_REPLACED

To celebrate our 25th year of publishing, we’re getting essays and remembrances from many of our authors, supporters, and friends over the years! We just published an essay from author Jennifer Stevenson, whose first pro sale was to Circlet for a book called SEXTOPIA, where she shares a table of contents with such folks as Suzy McKeen Charnas and Catherine Asaro. She has since gone on to publish novels with publishers large and small.

In her essay she hits some key thoughts about why science fiction and sex are perfect bedmates:

When the aspects of human experience being examined are sexual, that’s when science fiction gets really interesting. The axis of change can be physical with respect to the ableness of the characters, whether they are in zero G or two G, whether the characters are in ordinary human bodies or different bodies—alien, animal, vivisected, cyborged, single- or multiple-minded, sky’s the limit. The axis can be private or public—intimate gaze ranging from anonymous to domestic, political gaze from lower class to royals as mediated by the fourth estate, even warfare between sexual soldiers. The axis can refine to include class concerns: rented sex, sexual slavery, bartered sex between unequal classes, all the intrusions of economic power into sex. The axis can range between natural and synthetic, between colonized and colonizer, between mundane and divine, between extreme gesture and minimal expression, between the expected and the unexpected, exploring the meaning of both terminals…in terms of sex. Science fictional sex can be interesting.

Sex itself runs along many axes that cannot, in real life, often be isolated and examined. We come to it pre-equipped with ability and race and class and gender and sociopolitical power and expressive vocabulary and that most elusive and yet overwhelming of all factors, personal taste.

My perpetual disappointment with most erotica is that it doesn’t travel far along any axis. It’s boring.

To read the full essay, find it on the Kickstarter website here: https://www.kickstarter.com/projects/ceciliatan/circlet-press-25th-anniversary-best-erotic-scifi-a/posts/1993835

A new chapter appears every Tuesday. This week is Chapter Forty-Nine. Listen to the audio version at Nobilis Erotica here!

Luke noticed Sally’s absence during dinner, which was sandwiches and microwaved soup eaten in near silence in the living room; the weight of exhaustion and violence hung over the group like a drug haze. He washed out his soup bowl and went looking for her. Sootie trotted along behind him, happy to be wherever he was, peripherally involved in whatever he was doing.

He found Sally in the barn, leaning against the thick-beamed door frame and staring at the empty space full of footprints and recent trauma. He came up behind her and put his arms around her waist; she leaned against him, and her tensed muscles relaxed at his touch. The dog found a pile of hay and curled up to doze, one ear alert in case her people wandered. END_OF_DOCUMENT_TOKEN_TO_BE_REPLACED

We also had two awesome “happy anniversary” messages from two awesome writers, Charlie Jane Anders (a founder of i09 and Nebula Award winning author of All the Birds in the Sky) and Mary Anne Mohanraj (founder of Strange Horizons, the SpecLit Foundation, DesiLit, and author of The Stars Change): END_OF_DOCUMENT_TOKEN_TO_BE_REPLACED

A new chapter appears every Thursday. This week is Chapter Forty-Three.

Just for a few weeks. Just a few! Chana had been so very insistent, of course. Dhiar knew he couldn’t resist her indefinitely. It was always easier to go along with things, to acquiesce, otherwise she would be inconsolable and utterly torturous to live with for any length of time. He knew what he had to do.

And so Merry and Tomas received their own invitations, but the both of them were content where they were. It was good enough; they could surely get to Berlin easily enough, if they wanted, at some later date. So the Succubus and the Incubus were alone together, again. If they had taken an airplane, it might have been faster. But the both of them loved the romance of the sea, and it would not be all too long that way. They would sail for the first part, and the train would carry them the rest of the way. Perhaps on the return voyage, they would opt for flight. END_OF_DOCUMENT_TOKEN_TO_BE_REPLACED

A new chapter appears every Wednesday. This week is Chapter Fifty-Five: Kenet

I was aiding the General with a revised tally in the afternoon when a young soldier in a wide-brimmed hat came seeking him. I was surprised to learn that he was only looking for Roichal because he was hoping to find me. He introduced himself as Van, and as he swept off the hat once he was inside the tent I recognized him by his brown curls as one of the boys Harman had rescued from a Night Mage’s keep. One of the eldest, and it appeared they had made a soldier of him, now that his eyes were adjusting to the light.

Roichal exchanged a glance with me, as if to tell me he would be right outside if my virtue needed defending, but that he would leave us to speak in private. END_OF_DOCUMENT_TOKEN_TO_BE_REPLACED